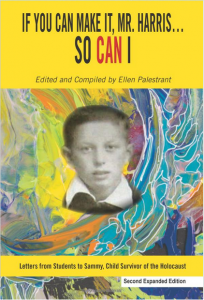 Now available only on Amazon.com:

If You Can Make It, Mr. Harris… So Can I: Letters from Students to Sammy, Child Survivor of the Holocaust (Second Expanded Edition)

Sam (Sammy) Harris, one of the youngest survivors of the Holocaust, speaks to thousands of adults and school children every year. Among the numerous letters he receives are those from hundreds of students who have been inspired by Sam’s courage and positivity. When Ellen Palestrant read these letters, she was struck by what they strongly illuminated: kids today are hungry for the values and character traits Sam epitomizes—and not the material values of cynical marketers with which they are constantly bombarded. Nor should kids be the unsuspecting recipients of messages of hate for the other broadcast by conspiratorial political and religious leaders and their colluding supporters. An insidious mind-grab exists and Sam Harris is the perfect antidote.  A Teacher’s Guide and Workbook is also available.